Winner of the 2019 RateHub Best Overall Rewards Card and the 2020 MoneySense Best Travel Card for Everyday Use, the Scotiabank Gold American Express is definitely geared towards travel but also works well for everyday spending. 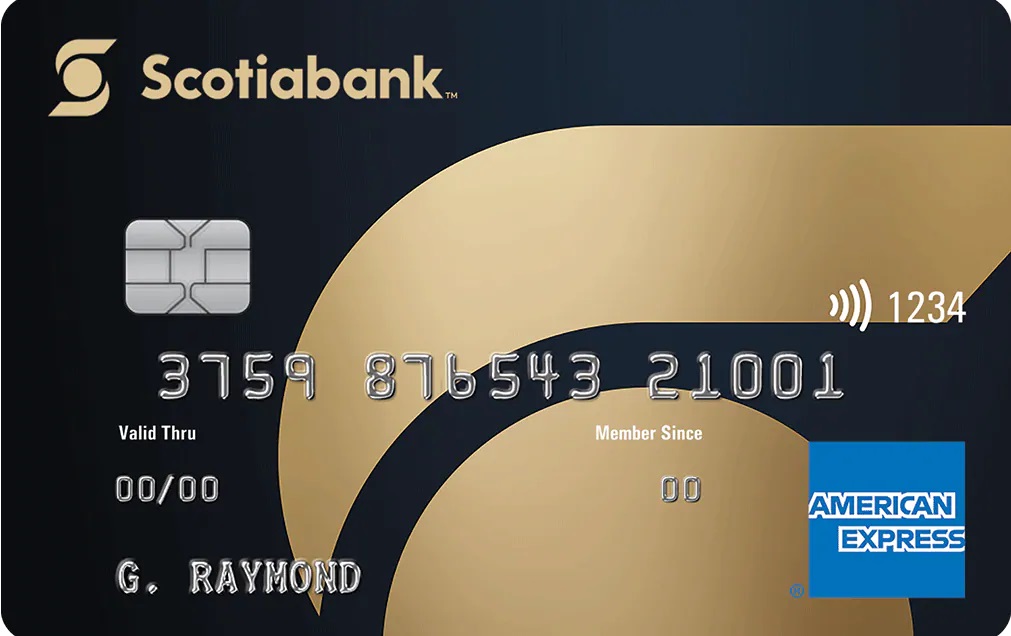 The headline benefit of the Scotiabank Gold American Express is that there are no foreign currency conversion fees. There are, however, lots of other benefits and rewards.

It may be worth noting that Scotia Rewards points can be exchanged for SCENE points (and vice versa). You will need a SCENE account to use SCENE points, but it’s very straightforward to set this up.

The obvious drawback to the Scotiabank Gold American Express card is the $120 annual fee. This isn’t the highest out there, but it’s certainly not the lowest either. Similarly, the interest rates are standard rather than low.

There is also the Scotiabank Passport™ Visa Infinite* Card. This has a slightly higher annual fee but is still in much the same price range.

Let’s see how these cards compare:

Your choice may hinge on where you intend to travel (or do your international shopping). If it’s wholly or mostly the U.S.A. then the Scotiabank Gold American Express might be the better overall deal. If, however, you travel or shop globally, then the Visa cards are likely to be more widely accepted.

Occasional travellers might be better with the regular Scotiabank American Express® Card or the Scotiabank Rewards® Visa* Card. These don’t have the same benefits, but they don’t have annual fees either.

If you use your card mostly in Canada, then the Scotiabank Gold American Express may not be the right option for you. The most obvious alternatives are the Scotia Momentum® Visa Infinite* Card ($120/year) and the Scotiabank Value® Visa* Card ($29/year). Both of these cards have “no-fee” versions, but the benefits on these are lower.

The choice between the Momentum range and the Value options is likely to depend on whether or not you are able to pay off your balance in full most months. If you can, then getting cash back on purchases can be a huge benefit. If you can’t, then you’d probably be better off with the super-competitive interest rates of the Value cards.

There are three main features that make the Scotiabank Gold American Express a good credit card for a small business.

Foreign currency conversion fees don’t just apply when you travel. They apply when you shop at international merchants. This means that they can be a real nuisance if you want to get the best bargains online.

Having travel cover included with your credit card not only spares you the cost of buying extra insurance, but it also spares you the hassle of having to arrange it. It also ensures that it will definitely be in place when you need it.

A $5000 minimum credit limit may sound on the high side for domestic use, but it’s actually on the lower side for business travel. Even if the known “big-ticket” purchases like flights and hotels are booked up-front, the costs of additional travel and entertainment can soon add up.

What’s more, it can be reassuring to know that, if necessary, your staff can simply book themselves return transport at short notice if they ever need it. Obviously, the cost of this will depend on where they are and what transport they need. As a rule of thumb, however, anything booked at short notice is likely to be more expensive than something booked in advance. This is why a higher credit limit can be especially useful for people who travel a lot.

Who is the Scotiabank Gold American Express best for?

The Scotiabank Gold American Express may be the ideal card for anyone who travels to the U.S. regularly. Avoiding currency conversion fees can result in major savings plus you get a wide range of additional travel-related benefits.

There are also very decent rewards for domestic use. That said, if you’re planning to use your card wholly or mainly in Canada, then you might be better looking at other options such as the Momentum cash back cards.

How to Get Funding for a Small Business in Ontario (2020): Beginner’s Guide to Grants, Loans & More

Maurice (Moe) Muise learned the ins-and-outs of government while an employee of the Government of Canada in Ottawa for 10 years. His current focus is helping small businesses in Ontario to identify and maximize government grants to grow their business.
Click here to learn more about Moe's background and how he can help your business.

Research and Development Grants for Ontario Businesses (2021): 23 Government Incentives to Boost Your R&D

Research and Development Grants for Ontario Businesses (2021): 23 Government Incentives to Boost Your R&D

Energy Efficiency Grants for Ontario Businesses (2021): 14 Programs You Can Apply for Today

Energy Efficiency Grants for Ontario Businesses (2021): 14 Programs You Can Apply for Today